Jeonju City, known for its traditional Hanok village, is located just 3 hours south from Seoul. Hanoks are traditional Korean houses, as can be seen in the pictures. Having spent quite some time in the world’s second biggest metropolitan area, I was looking forward to getting away again and seeing a very traditional village, the locals of Korea outside of Seoul, and learning a bit more about their culture. For only 10,000 KRW (7.50 EUR), I bought a round-trip bus ticket to Jeonju and back. Koreans weren’t allowed on the bus, just tourists, which left me slightly skeptical already.

Soon that skepticism lead to disappointment. What was once a beautiful traditional Hanok village mastered by true locals, had become one of the most visited tourist attractions of Korea, after Seoul, Jeju and Busan. The traditional village is famous for its traditional buildings, which strongly contrast with the modern city surrounding it. In 2010, Jeonju was designated as an International Slow City (a town or city which promotes a high-quality environment and healthy eating based on locally grown and prepared food) due to it being such a calm area where traditional culture harmoniously blends with nature.

Views from above taken at a rooftop cafe were spectacular, as I could clearly see the contrast between the traditional village, the modern city and the colourful nature, but as soon as I hit the streets again the smile disappeared from my face. Seeing expensive restaurants, over priced guesthouses, arcades, charity souvenir shops selling accessories from Kenya, electric scooter and Hanbok (traditional Korean dress) rental places, just took away the whole traditional and local aspect of the village. The locals had been forced to move out and make space for foreign tourists. What was once a beautiful traditional village, had now become the 4th most commercial spot in Korea.

The city of Jeonju is famous throughout the entire country for its version of bibimbap. Bibimbap (비빔밥), literally means mixed rice. It is served in a bowl of white rice with namul (seasoned vegetables), gochujang (chili pepper paste), soy sauce, and a raw egg or a piece of sliced meat, usually beef. It appears that the recipe for bibimbap in this city is to be based on a royal court dish of the Joseon Dynasty, which lasted for approximately five centuries, from July 1392 to October 1897. It was the best one I’ve had in my past 3 months in Korea, just perfect!

Right by Namdu Market, a local clothes and food market, behind the traditional village, the locals were spotted. With barely anything but a piece of cardboard to sit on, fruits, vegetables, meat and fish of at least a few days old, they struggle to still make a living. Tourists with selfie sticks and mirrored iPhone cases riding electric scooters had wiped the real tradition out of its origin. Like nobody cared. But it struck me. 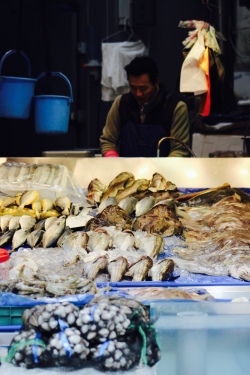